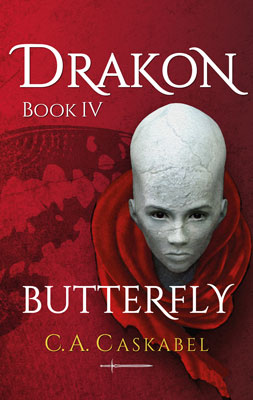 The fourth and final book in the Drakon series, the debut of C.A. Caskabel
The thrilling culmination of the story of Da-Ren, Zeria, Eusebius, Noki, Sah-Ouna, and Malan.

After five years of war, Da-Ren returns to Sirol hoping to reunite with Zeria. Once again he has to stand between the fanatics of his tribe and the innocent. The more he strives for peace, the deeper he dives into a web of murder and deceit.

A happy end? It all depends on where you’ll stop reading. Da-Ren in his own words will urge you to stop reading in the middle of the manuscript:

“I’ve heard of scribes who make up such tales, and tribes that devour them for pleasure, tales of their triumphant heroes and kings, their chosen-ones and their princes. This is not such a tale. It would be if I stopped here. A hearth, a man, a woman, boiled venison. The end. If someone fooled you and told you to expect this, listen to me and stop here. Because I come from a tribe that dwells on the borders where monster meets man and necessity sows tragedy. In my tribe, we don’t sing Stories for fools and kings but for the Goddess to pass judgment. And, beware for the last time, this Story goes on.”