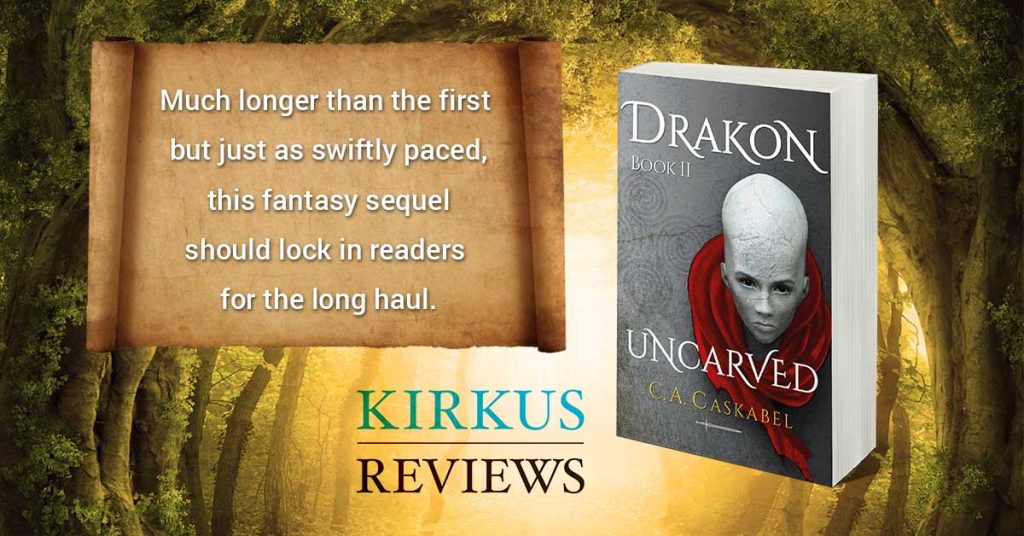 An orphan faces unrelenting challenges during a competition to decide which teen is worthy of becoming the Tribe leader in this continuation of Caskabel’s (Drakon Book I, 2016) series.

Having made it through a ferocious 40-day trial, Da-Ren and 12 peers are next in the hands of Chaka, Leader of the Guides of the Uncarved. The 13 boys have no carvings, which are usually indicative of failure during the trial. This means that the best from the group could be the Tribe’s Khun (leader), if current chief Khun-Taa dies within the subsequent five winters. Some boys can’t cut it, with carvings designating them warriors instead, while others end up as corpses for the pyre. Their tests include braving reputed evil spirits populating the Forest and each boy killing an opponent inside the arena-like Wolfhowl. Unfortunately, Da-Ren may lose favor with the First of the Tribe’s Ouna-Mas (witches), Sah-Ouna, though it’s believed she knows who the next Khun will be. No one’s pleased that Zeria, an othertriber, evades Da-Ren during a hunt, but he secretly aids in her escape. While fate plays a part in naming the Khun, Da-Ren soon learns that some in the Tribe may have already chosen a leader. In this fast-moving installment, Caskabel picks up right where Book I left off, making reading the previous fantasy novel a virtual necessity. Da-Ren’s first-person narrative is striking (vividly detailing why some characters have snake-egg-shaped heads) and rife with anticipation. He, for one, teases a death immediately before it happens, and an older Da-Ren (telling his engrossing story to a monk) bears a scar whose origin is later revealed. At the same time, there’s unmistakable profundity: Da-Ren’s potential love for Zeria seems doomed, and many children deftly concoct Legends of fathers they’ve never known (like Da-Ren and his “dad,” Er-Ren). In a setup for Book III, Da-Ren contemplates his future with the Tribe, which has aspirations for conquering cities in the South.

Much longer than the first but just as swiftly paced, this fantasy sequel should lock in readers for the long haul.