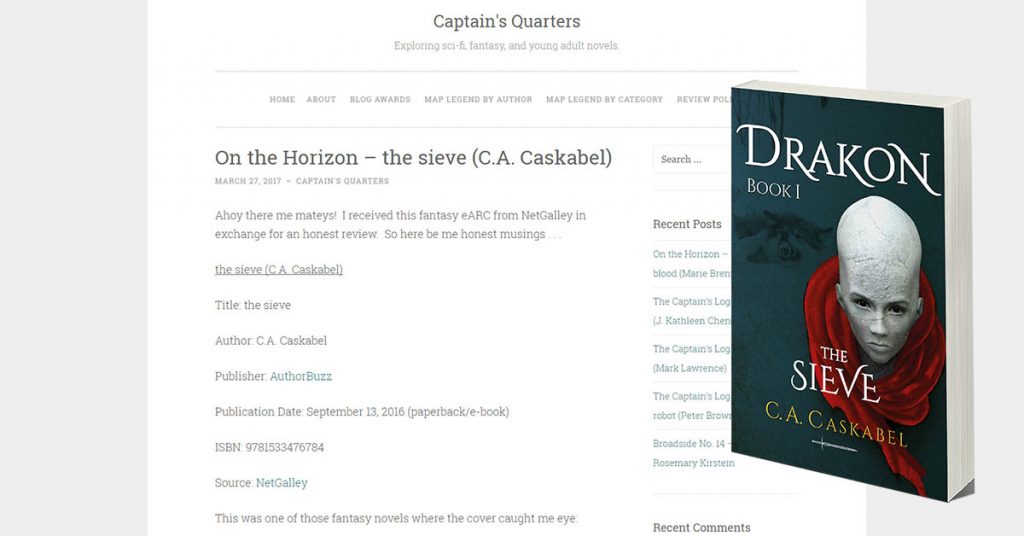 Not only was the face on the cover odd but the “Drakon” made me wonder if there were dragons in it. I have a soft spot for dragons. The synopsis sounded interesting so I requested it. Of course by the time I read the book I had forgotten what it was about. I actually think that contributed to me enjoyment of the story.

The story is of a “hero” Da-Ren who has fled to a monastery asking for redemption for his wife and daughter. The monks there require that he tell his story in detail and assign a young monk to transcribe the tale. The author has chosen to split this epic fantasy in four parts. This novel was part one and deals with Da-Ren’s training in the Sieve.

I enjoyed this setup from the monk’s point of view. We approach Da-Ren’s story from the end point knowing that he has been labeled the “First Blade of the Devil.” The monk’s insight into Da-Ren’s character set the tone for the reader learning Da-Ren’s tale. While most of the story is told from Da-Ren’s point of view, the author does returns to the monk’s viewpoint. I didn’t always enjoy the interruption.

The Sieve is a coming-of-age trial for children of the tribe. Da-Ren is an orphan raised in the dregs of society. It is a warrior based society where both men and woman can have high roles if they earn it. The spiritual side of the tribe is controlled by women who are witches (though men play a part as well). I enjoyed that there were some strong female characters. Da-Ren being an orphan, in this culture meaning his mother has died, is placed outside the usual structures. He is uneducated, mistreated, and considered worthless to the tribe.

I found Da-Ren to be a compelling character and narrator. The society was rich with tradition and detail. The myths in particular were compelling and enriched the narration. The trial itself was very unusual in its composition. I found this novel overall to be highly enjoyable and read it in one sitting. While there were some inconsistancies in the story, I am not sure if they were part of the overall larger picture or just mistakes. In any case, I thought it was a great introduction to a fun character and worldview and I certainly want to know what’s coming next.